I am so excited to tell you about this dish.  My sister and brother-in-law gave us a pasta roller attachment for our KitchenAid mixer and I’ve been itching to try it.  But we’ve been going out of town nearly every weekend and it didn’t seem wise to try to tackle it for the first time on a work night.  So we decided today was finally the day and in preparation we went to one of my favorite places in the Boston area, Hutchins Farm.

Hutchins, in beautiful Concord, MA, is an organic farm that Joseph and I found on a bike ride shortly after we had moved north.  It was my favorite place to pick up produce when I worked in Concord a couple years ago.  It’s still my favorite place to get fresh produce, but it’s harder now that I’m not working in the area.  But it’s well worth the trip for their amazing fruits and veggies, especially when you have something special in mind.  Something like my making your own pasta for the first time!

I had been nervous to make my own pasta and kept reminding myself that we could always order pizza if we needed to. We started by making a whole wheat pasta dough from the recipe book that came with the KitchenAid attachment.  I got pretty nervous when I emptied the dough onto the counter for one last kneading before rolling and found that there were a ton of crumbs at the bottom of the bowl.  I was really worried that it was too dry, but did my best kneading it by hand and formed a log and cut it up.  I was still worried that it was too dry and was also really confused about how I was going to get this big hunk of dough through the roller to make the pasta.

I flatted the dough a bit by hand and with quite a bit of skepticism turned on the roller.  To my complete shock, it worked! Easily!  It took a couple of times through the roller, but before long I was rolling long, thin sheets of pasta.  I’m so used to working with delicate pastry doughs that I was expecting lots of tearing, but this was sturdy pasta dough and it was so much easier than I had expected. 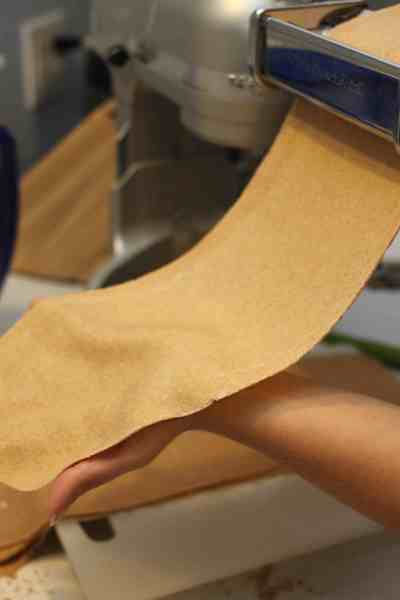 That was pretty cool, but what was really exciting was turning the sheets of pasta into fettuccine.

It was so much easier than I expected and oh man, so much better than the emergency pizza we would have had to order if it hadn’t been so easy and hadn’t turned out so well.  But armed with the tastiest arugula and mutli-colored cherry tomatoes from Hutchins, some garlic, shallots, chili pepper flakes, pecorino romano, and oregano from our garden, this dinner was phenomenal.  Oh, and the merlot-grenache blend we paired it with didn’t hurt.  We spent the entire dinner ooing and ahhing and unabashedly patting ourselves on the back.  It was really good.

So, even though it may sound kind of daunting to the uninitiated, making your own pasta really is pretty easy and oh so worth it.  Even if you’re not going to make your own, I think you’ll really enjoy this recipe with some store bought fresh pasta.  And if you can find arugula half as good as what they have at Hutchins, well, you’re really going to enjoy it. 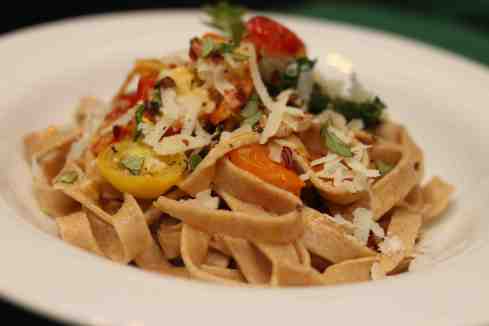 Heat the oil and butter in a skillet. Saute the shallots for about a minute, then add the garlic and saute another 3 minutes or so.  Add the chili pepper flakes. After a minute or so, add the tomatoes and cook for a couple minutes.

Meanwhile, cook the fettuccine in boiling, salted water until al dente, about 4-5 minutes.  When there’s one minute remaining, throw in the arugula.  When that last minute is up, drain the pasta and arugula.

Add the tomato mixture to the pasta and arugula. Mix in the pecorino romano and fresh oregano.  Spread among 4 bowls and garnish with any leftover oregano, pepper flakes, fresh ground pepper, and the remaining pecorino romano.

Boston food blogger enjoying life one crumb at a time. END_OF_DOCUMENT_TOKEN_TO_BE_REPLACED
This entry was posted on Sunday, September 19th, 2010 at 11:34 pm and tagged with pasta, vegetarian and posted in Recipe, savory. You can follow any responses to this entry through the RSS 2.0 feed.
« ginger-miso halibut in shiitake and edamame broth with soba noodles
maple-mustard pork tenderloin with caramelized apples »